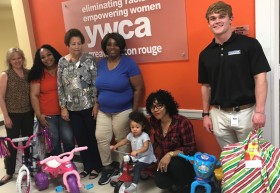 Taylor Porter delivered holiday gifts for 75 children through the YWCA Wyandotte Early Head Start Center, one of the agencies served through the 28th annual Baton Rouge Bar Foundation’s Young Lawyers Section Holiday Star Project. The annual project provides gifts to children in the local Baton Rouge area in a partnership with Volunteers of America Special Services and through several children and education agencies.

The Baton Rouge Bar Foundation, a tax-exempt as a charitable organization by the Internal Revenue Service under section 501(C)(3) of the IRS Code, is the non-profit arm of the BRBA, which is a voluntary, professional organization of local lawyers and judges that is in its 90th year of service to the community.

Since Taylor Porter's founding in 1912 when co-founder B.B. Taylor helped launch Baton Rouge's first YMCA, Taylor Porter has embraced the role of “corporate citizen” and continued for more than 100 years a strong tradition of both pro bono and community service throughout our City, supporting more than 100 community and nonprofit organizations. Whether serving on the boards of directors of nonprofit organizations or making contributions to worthwhile causes, our attorneys and staff make significant contributions to the communities in which they live and work.