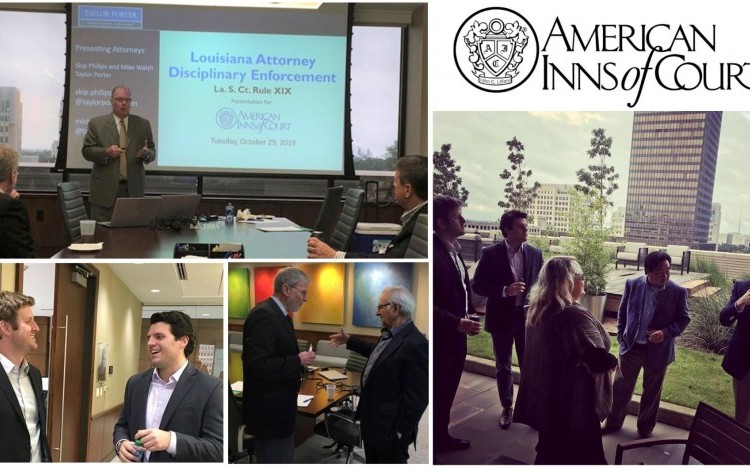 Taylor Porter Partner Mike Walsh spoke on "Louisiana Attorney Disciplinary Enforcement," in an Oct. 29 meeting for the Dean Henry George McMahon American Inn of Court, which includes local Baton Rouge judges and lawyers dedicated to restoring the nobility and ideals of the legal profession in an informal, entertaining, and practical way. The presentation included one hour of CLE credit in Ethics.

Taylor Porter attorneys Walsh and Skip Philips serve as team captains of Pupilage Group II of the local Inns of Court. The Dean Henry George McMahon American Inn of Court was officially created when its charter (No. 71) was granted by the American Inns of Court Foundation on June 2, 1989 at the fifth annual meeting of the American Inns of Court. The founding members of the Inn were The Honorable Judge John V. Parker, Frank W. Middleton, Jr., Robert J. Vandaworker, and James A. George. Judge Parker served as the first President of the Inn. In 2007, the Inn was recognized with the Circle of Excellence Award. Only 8 of 373 Inns received this distinction in 2007.